Best Programming Languages to Learn in 2022

The top reason that programming is so important to learn in today's modern world, is that it commands a computer to complete the tasks over and over again, so anyone can use to save repetitive task and save time. The software can do it automatically and accurately.

Best programming languages to learn in 2022:

Based on jobs demand, Python is the top language, followed by Java, JavaScript, C++, C# and C - based on Internet Sources.

My opinion here is not to explain every programming language in detail. But, encourage you to learn and choose the right language for you to excel in a particular career or profession.

For beginners, I suggest you to take one programming language on priority and keep improving your skills periodically.

I am web developer, and I have great command on Python and PHP programming. So, If you want to built a website or any web application to run a business or have an idea to turn into reality! then, surely take this advice as an advantage for the best interest. Start to invest in yourself.

Python, JavaScript and PHP is a great choice to explore the programming language.

Learn to become a Full Stack Web developer, Front-End & Back-End Developer in software and IT Industries.

True line that no one speaks about: No schools are updated till now to teach their kids about programming languages and their importance. When we get into higher education, we start to realize about the significance of it.

This article guides about the best programming languages that are currently on the rise. Let’s see what technologies will be most popular in 2022!

At the top of our list is Python. It is an object-oriented, flexible, general-purpose programming language created 30 years ago by Guido van Rossum. This technology is used in the development of applications such as: Instagram, Pinterest, Disqus, Uber, Reddit, Dropbox, Spotify, Google Search, YouTube and many more.

Therefore, programmers who know this programming language are highly sought after by IT recruitment agencies. Its popularity is underlined by the fact that In 2022 Python is still the top programming language in TIOBE and PYPL Index. It can be assumed that this tendency will continue. 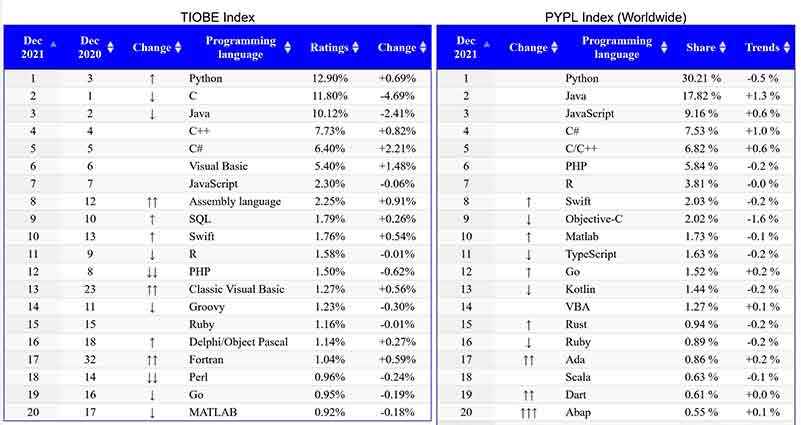 Some information about Python:

Although Python is 30 years old, it’s still growing in popularity. Just look at the Tiobe INDEX:

Python is my best choice to choose your career in this. Learn Django: The web framework for perfectionists with deadlines, Flask (web framework), Wagtail Admin Improved version of Django and there are also more tools to learn. Be perfectly fine in any one of these to built real world complex web applications.

JavaScript, often abbreviated as JS, is a programming language that is one of the core technologies of the World Wide Web, alongside HTML and CSS. Over 97% of websites use JavaScript on the client side for web page behavior, often incorporating third-party libraries.

JavaScript was originally used only to develop web browsers, but they are now used for server-side website deployments and non-web browser applications as well.

Javascript is the most popular programming language in the world and is in high demand among various organizations. JavaScript is used to develop interactive web applications. JavaScript can power featured like interactive images, carousels, and forms. The language can be used with back-end frameworks like Node. js to power the mechanics behind a web page, such as form processing and payments.

Some information about JavaScript:

Java is a high-level, class-based, object-oriented programming language that is designed to have as few implementation dependencies as possible. Java is used to develop mobile apps, web apps, desktop apps, games and much more. Just a few years ago, Java probably would have been at the top of our list. It was the language of the year in 2005 and 2015 on list of TIOBE Index for Java.

In addition, Java is still a stable language that many large corporations support. It is used by companies such as NASA, Netflix, Spotify, LinkedIn, Uber, Amazon, and many more.

This programming language is now used in mobile applications, web development, and even Big Data. It is the primary programming language for Android devices, so its demand will still be high. Today it is still the 5th most popular technology according to Stack Overflow.

Some information about Java:

Kotlin is a cross-platform, statically typed, general-purpose programming language with type inference. Kotlin is designed to interoperate fully with Java, and the JVM version of Kotlin's standard library depends on the Java Class Library, but type inference allows its syntax to be more concise.

Kotlin is a programming language that is part of the JVM family. It is concise and easy to read and maintain. It has a safe and intelligent compiler, and it can run on a variety of systems. When in 2019 Google announced that Kotlin is now its preferred language for Android apps, then the interest in this programming language increased noticeably. It’s worth knowing that Google apps are based on Kotlin. If you are interested in Android app development and want to work in this field, then learning Kotlin in 2022 may be the right choice.

Although it has a smaller community of software developers than Java, it is much more well-liked (almost 62% of programmers said they love this language) and better paid.

Ruby is an interpreted, fully object-oriented programming language. It was developed in the 1990s and is often considered as easy to learn. As a technology with a simple syntax, it is often used for scripting, text processing, and prototyping new applications.

Its significant advantage is the massive web frameworks and applications written in this language, such as the well-known Ruby on Rails.

Ruby is a stable and popular language used by Twitch, Shopify, Starbucks, or Tumblr. Moreover, it is the 6th top-paying programming language in the world.

PHP is one of the general-purpose scripting languages that will continue to hold its importance in the upcoming years. It is among the first server-side language that can be embedded with HTML to add functionality to web pages. Due to the increasing online trend, PHP developers are in high demand. Some of the astonishing features are:

C and C++ developers can make use of compilers for a wide variety of platforms, making applications developed in these languages largely transportable. Both C and C++ are considered high-performance languages. As such, they are widely used in developing applications where performance is a critical issue, such as client/server applications, commercial products like Firefox and Adobe, and video games.

C# is a programming language that runs on the .NET framework and is developed by Microsoft in 2000. It is effective in making desktop applications and games. As per the survey, 34% of the top mobile games are made using C#. It is a well-designed language and is highly in demand globally.

So mastering C# is an amazing career option that you can make in 2022.

This technology was developed by Google in 2007 and it was used for developing web apps and APIs. Even though Go hasn’t received a growth rate on such a scale as the previously described languages, it can still be classified as highly sought after in the skills.

It is an easy-to-learn, general-purpose programming language with a clean syntax, making it easy to write simple, reliable, and efficient software.

Today it is one of the best-paid technologies and the second most demanded backend programming language. That means that if you learn this programming language, you won’t have any problems finding a well-paid job. According to Stack Overflow, the median of their yearly salary is around $76k.

Go, like Python, is used to create systems based on artificial intelligence, so its popularity will likely continue to grow.

Along with Python, R is one of the most widely used programming languages in machine learning and Big Data. It is used by many companies, including Google and Facebook.

R is a programming language that is popular along with data analytics, so it’s often required in job offers. The R language has a built-in library that allows programmers to create machine learning algorithms. Given the growing popularity and demand for AI solutions, this technology will undoubtedly be worth watching in 2022.

Swift is a programming language created in 2014 by Apple. It replaced Objective-C, which the company previously used. It is mainly used in devices running macOS, iOS, and Linux. Its syntax is similar to Java and C#, and it allows you to write applications for watches, tablets, computers, smartphones, TVs, and servers.

Apple is still one of the leading brands, and as a result, Swift will continue to be a big player this year. According to TIOBE, Swift’s popularity is on the rise again, and as a result, it is a technology worth knowing in 2022.

Perl is a family of two high-level, general-purpose, interpreted, dynamic programming languages. "Perl" refers to Perl 5, but from 2000 to 2019 it also referred to its redesigned "sister language", Perl 6, before the latter's name was officially changed to Raku in October 2019.

It has been nicknamed "the Swiss Army chainsaw of scripting languages" because of its flexibility and power, and also its ugliness.

Perl is a high-level programming language that's easier to learn when compared with Python. Python is more robust, scalable, and stable when compared to Perl. While Perl code can be messy, featuring many paths to accomplish the same goal, Python is clean and streamlined. Hello, and welcome to your new coding journey!

Note: Each programming language is designed for a specific purpose and has its relative merits and demerits. Also, the answer to the most useful programming language to learn is subjective and depends on your familiarity with coding. Irrespective, the following 3 parameters are essential to narrow a language a choice.

Job Opportunities in the chosen Language.

The popularity of the chosen programming language should be on an uptick. Your Career / Life Goals.

The next programming language that Developers want to learn

Developers who are already working with other programming languages are most interested in learning Python, JavaScript, Go, and Typescript.

The most loved programming language by developers

Rust has been the most loved programming language by developers for the past 4 years. TypeScript - a statically typed version of JavaScript - also has a passionate fanbase, and was the second most loved language.

The most commonly used programming language is JavaScript 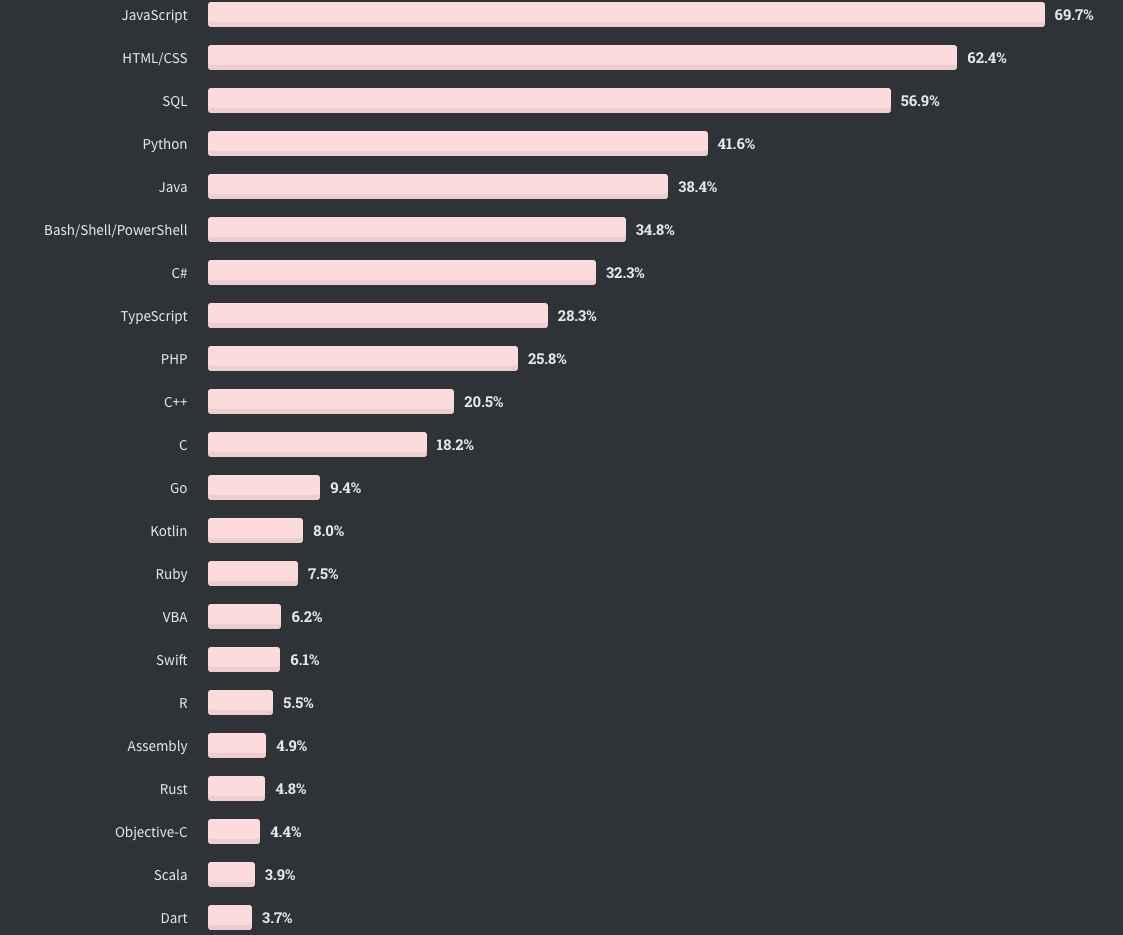